Comedy » Clash of the Families 2 (Gyungchalgajog) 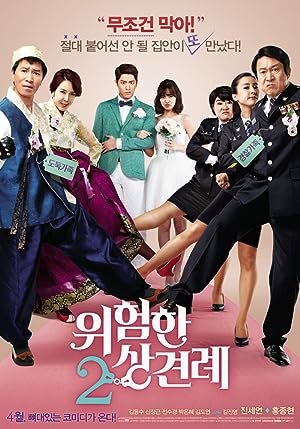 Clash of the Families 2 (Gyungchalgajog)

Park Yeong Hee is a former national fencing athlete and currently a detective in the narcotics department. She also comes from a family of cops, from her soon-to-retire father to her siblings and their spouses. Han Chul Soo is the only son of two notorious criminals; his father steals cultural objects while his mother specializes in document forgery. Chul Soo and Yeong Hee fall in love, but when the couple declared their intention to get married, both families disapproved. To placate Yeong Hee’s father, Chul Soo promises that he will pass the police officer exam and become a detective like her. He spends the next seven years studying and preparing for the exam, with Yeong Hee by his side as supportive girlfriend. As the exam date nears, Chul Soo’s parents resort to desperate measures to sabotage the wedding and his future in the police force. Meanwhile, Yeong Hee and her family are ordered to investigate a serial murder case, and using his parents’ expertise, Chul Soo helps with the case.

The Knight of Shadows: Between Yin and Yang (Shen tan Pu Song Ling)

It’s Not Decent for You Too , Matomo Janai no wa Kimi mo Issho

What Happened at the Carpenter's Shop (2020)

You're My Glory , Ni Shi Wo De Rong Yao